“Taking the Time to Live: The Healing Voyage of Pato Feo”, a personal adventure penned by Captain Ron

In 2009 Ron Fugere published his own book about his solo circumnavigation of British Columbia’s Vancouver Island. The book, Taking the Time to Live: The Healing Voyage of Pato Feo describes his journey aboard his two-masted ketch over a span of five months, and his adventures along the way.

Much more than just a voyage, his journey was one that happens when you break away from “life as you know it” and take the risk to leave the comfort zone of your own familiar routine. Opening the book, Captain Ron reflects on the dissolution of his marriage of twenty eight years and his passion to find a new direction in life: “For thirty years – all my adult life – I’d run with the herd, leading a very normal life. I’d had a comfortable home, an attractive wife and two wonderful kids, a couple of cars, a motorcycle, a boat, about a hundred channels on cable TV and beer or scotch to help me wind down at the end of another day spent at my latest miserable job and commuting in the stop-and-go traffic of ‘Pugetropolis.'”

No longer happy “working for a living”, Ron was determined to find a sense of purpose for the next 30 years of his life. Ron quit his job, sold his belongings and bought a Coronado 35-foot ketch, a “big, ugly boat” that he affectionately named Pato Feo – the ugly duck. His plan sail alone without a route or plan, leaving navigation to chance, circumstance, and whims, wherever the heart will take him. His crew – a three-year old tabby cat named Slipper.

He sailed north accompanied by Slipper, a compass, some charts and a GPS. No cell phone, no TV, no other comforts and distractions of modern life.

The sights, the people, the natural beauty and cultural history of the American and Canadian Northwest, are wonderfully reflected in Captain Ron’s “Taking the Time to Live”. He learns to survive on what fare he could glean from his humble stores, supplemented by fresh caught seafood, and a daily pot of coffee… to read in silence and to enjoy his time alone… to gain insights into lives of strangers he meets along the way and to plot his own course in travels and life. 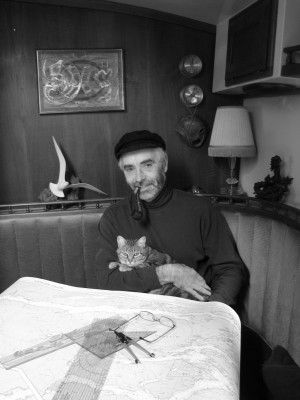 “Over the course of my journey, I’d found peace. I’d found a new direction for my life, a new love of my life, the sea. If I were to live out my days alone, I would live them happily.”

Upon returning from his adventure, Captain Ron continued living his dreams, obtained his U.S. Coast Guard Masters license and went to work as a skipper on Charlie Wells, the private ferry serving Heron Island.

Captain Ron joined Waterways Cruises in May of 2009 and skippered private charters and dining cruises and entertaining guests with his in-depth knowledge of the Seattle area and his never-ending sense of humor.

In 2015 Ron realized his ultimate goal of creating his own sailing charter business, moving to Bellingham and obtaining Diminuendo, a 43’ Jeanneau sail boat. We’ll have to wait for his next book to find out more!