About the San Juan Islands, Washington

Nestled in the Salish Sea between Vancouver Island and Washington coast, the San Juan Islands offer the perfect getaway. This popular Northwest archipelago is conveniently located between Seattle and Vancouver BC, yet despite this proximity, seems a world away. By a happy coincidence, the islands are located in a rain shadow cast by the Olympic Mountains and Vancouver Island. This results in a higher than average number of dry, sunny summer days in the otherwise cloudy Pacific Northwest. Temperatures in The San Juan Islands range from around 70° in the summer to 40° in the winter. 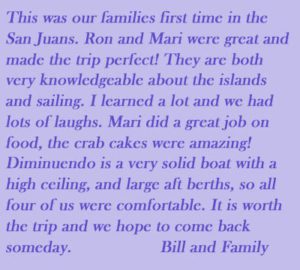 There are 172 named islands and reefs in San Juan County, however, the Washington State ferry service is available only to San Juan Island (with the county seat Friday Harbor), Orcas Island, Lopez Island and Shaw Island. These obviously are the most populous and host the majority of lodging and dining options. When you book a fully crewed boat charter, however, you are no longer limited when it comes to exploring the other islands in this rich archipelago. Our all-inclusive sailing charters allow you to lose the crowds and experience remote islands only accessible by boat. Explore numerous hiking trails, photo opportunities and be on the lookout for wildlife including otters, sea lions Dall’s porpoises and from May to September, pods of orca whales. 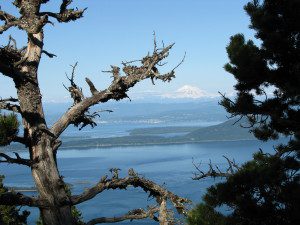 Ranging from quiet beaches to the 2,409-foot-summit of Mt. Constitution, Orcas Island has much to offer! Most stops are part of the state San Juan Islands Scenic Byway, designated for their unique beauty and cultural significance, and this 2- to 3-hour tour touches on the island’s highlights and hidden gems, Most of Orcas Island’s 57 square miles are rural and hilly, with curving roads that wind through forests and farms, fields and homes. 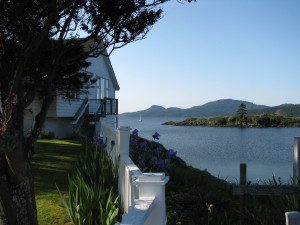 Visit one of the nation’s most beautiful parks to hike, bike, swim, or explore— the 5,252-acre Moran State Park, with several lakes and more than 38 miles of hiking trails. There, you can drive, bike, or hike up Mount Constitution, the islands’highest point, for a spectacular view of island-dotted sea and snow-capped Mount Baker. At the center of Orcas Island, the town of Eastsound features art galleries, boutiques, restaurants, cafes, bookstores and other visitor attractions. 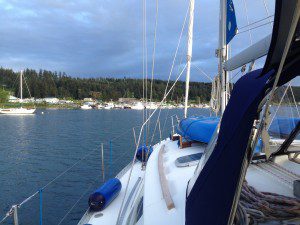 Lopez Island is known as “the Friendly Isle”—15 miles long with 63 miles of shoreline and 2,500 year-round residents. The Lopez landscape blends forests with rolling farmlands, and quiet bays and driftwood-strewn beaches with distant views of mountain ranges and snow-tipped Mount Baker. Lopez’s natural beauty and quality of life have attracted a variety of residents—artists, craftspeople, entrepreneurs, musicians, farmers, fishermen and nature lovers. 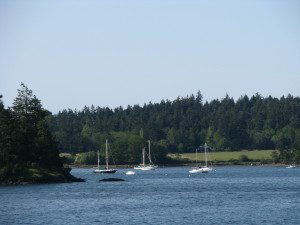 Scandinavian farmers arrived here in the 1850’s, drawn by the island’s gentle topography, and Lopez Island farms today raise an eclectic range of products, from sheep to llamas, wine grapes to apples, pears to kiwis.Lopez offers the easiest cycling of the three main San Juan Islands. Consider renting one from Lopez Bicycle Works or Village Cycles. 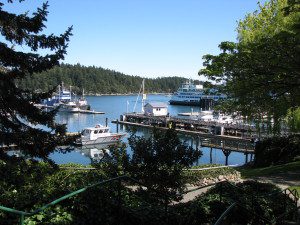 Friday Harbor is the very walkable hub of San Juan Island, the most populated of the San Juans. Browse art galleries, bookstores and antique shops enjoy a fresh seafood dinner overlooking the harbor or the many other local restaurants. Visit The Whale Museum and the San Juan Historical Museum, or stroll through the marina. A walking tour of Friday Harbor will includes many of the town’s important and historical sites.No need for a car to see Friday Harbor! Everything is within walking distance including San Juan Transit shuttle buses to take you around the island, as well as bike, and moped rentals. 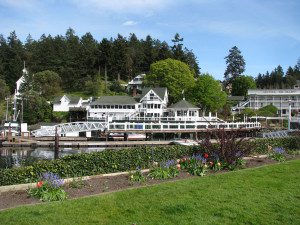 At historic Roche Harbor Resort on the north end of the island you’ll find several waterside eateries, a local farmers market and a marina. The resort’s centerpiece, the Hotel de Haro, has stood since 1886, when Hudson Bay Company camp grew to become a full-fledged lime works and company town—look for remnants of the giant lime kilns that still dot the area. Near the entrance to Roche Harbor you’ll find the San Juan Islands Sculpture Park—more than 125 sculptures placed in an open, 19-acre, natural setting. Here you’ll learn about the 1859-1872 Pig War ”Crisis,” when Great Britain and the United States settled ownership of the islands through peaceful arbitration—the national park marks the sites of the U.S. and British encampments. 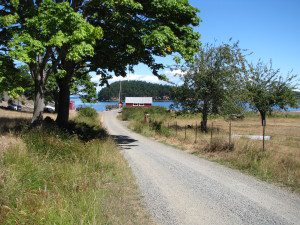 Stuart Island is only accessible by boat; however it offers many public buoys and docks for visitors at either Prevost Harbor or Reid Harbor. Both offer excellent sheltered moorage and easy access to the island. 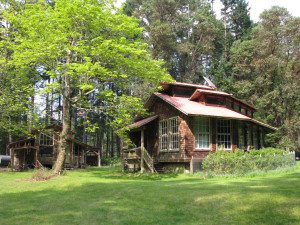 A favorite site to visit is the local one room schoolhouse. This school opens and closes periodically due to lack of attendance. In 2008 the school boasted a student body of two students! Most recently it closed until further notice in June of 2013.Up until that point, it was the last public school to “ boast” no running water or electricity! Located nearby is the un-staffed and always open ‘Teacherage Museum’ which is a single room with displays about the history of the school house and the island. 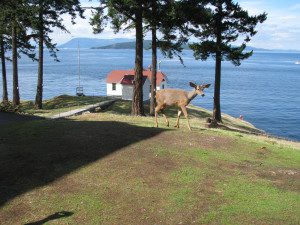 The Turn Point Lighthouse and nearby cliffs known as “Lover’s Leap” are popular hiking destinations accessible by an unimproved county road from the harbor which is essentially a large trail since there are very few cars on the island.Shellfish are prized resources of the Puget Sound; the cool, clean waters provide some of the finest shellfish habitat in the world. Washington State is the nation’s leading producer of farmed bivalve shellfish (clams, geoduck, mussels and oysters) and with the San Juan Islands dozens of Public Clam and Oyster Beaches and miles of coastline it is a popular place for individuals to find these elusive and sought after shellfish. There are several public shell fishing beaches on Stuart Island open year round for clams and oysters. 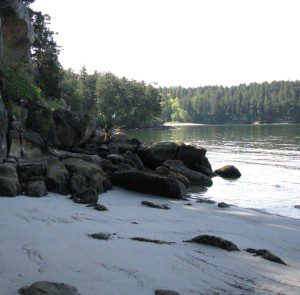 Just an hour or so North of Barnes and Clark Island is Sucia Island. It is considered the crown jewel of the state’s marine park system. It is consistently ranked as one of the top boating destinations in the world. Sucia Island and several smaller islands comprise the “Sucia group spot for boaters of all kinds.

Activities include sunbathing, beachcombing, clamming, crabbing and hiking. Explore the unique natural shapes formed by eroding sandstone formations along the shore.The coastal Salish tribes of North America occupied this area for thousands of years. There is evidence from archaeological surveys that Sucia Island was used by Native Americans for more than 2,500 years. Deer, shellfish, fish, marine mammals, plants, and herbs were harvested seasonally. 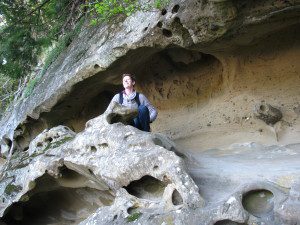 Sucia Island was a smugglers’ paradise, from Chinese laborers in the 19th century to bootleg booze during prohibition in the 1920’s.The Washington State Parks and Recreation Commission acquired about one-third of the island in 1952. Later, developers wanted to parcel up the remainder of the island into vacation lots. Seattle yachtsman Everett Henry spearheaded a drive to raise money to purchase the island from developers. The Interclub (now incarnated as the Recreational Boaters Association of Washington) was formed, and $25,000 was raised to purchase the land. In 1960, that land was donated to Washington State Parks for use as a marine park. Washington State Parks acquired the remaining parcels of private property in 1972, and Sucia Island in its entirety was a state marine park. 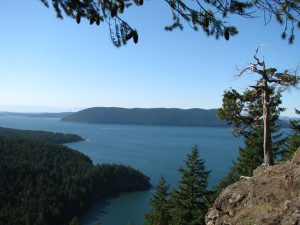 Interesting fact: There are no Cypress trees on Cypress Island! Incorrectly identified by Captain George Vancouver, they are actually Rocky Mountain Junipers. In 1975, the Washington Department of Natural Resources (DNR) designated 156 acres (0.63 km2) as a Natural Area Preserve, and added 56 more acres in 1978. At that time, however, most of the island remained in private hands.Several attempts were made to develop the island. Spokane industrialist Raymond A. Hanson acquired 3,150 acres (12.7 km2) on Cypress Island in 1978 and, in the 1980s proposed first a large-scale public utility development and then a five-star resort and golf-course. Small land-owners on the island, organized in a group called “Friends of Cypress Island” fought both proposals. Hanson finally sold his land to the Department of Natural Resources in 1989. This purchase along with subsequent, smaller purchases, have allowed the Natural Area Preserve to be expanded to 1,073 acres (4.34 km2), out of the 5,100 acres (21 km2) that comprise the Cypress Island Natural Resources Conservation Area.The waters surrounding the island became a DNR Aquatic Reserve in 2007 Cypress Island is a popular destination for boaters, offering recreation opportunities, scenic viewpoints, old growth forests, lakes, and miles of trails.