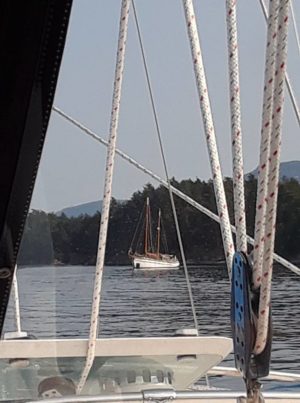 You never know what you might see while exploring the San Juan Islands. Sure, you’re likely to see fabulous sunsets, nature trails and the occasional pod of orca whales. You usually wouldn’t associate the islands with movie stars and music legends, but apparently they enjoy the islands just as much as everyone else!

We’d just hunkered down in Echo Bay on Sucia Island when Ron recognized a very distinctive historic wooden sailing yacht in the harbor. I suppose only a true fan such as Ron would recognize the WN Ragland, a 105 year old, 101-foot Baltic trading vessel, as being owned by the one and only NEIL YOUNG. Just at sunset, with the blood moon soon to rise in the east, we were on our way back from checking our crab pot out in the bay. Glancing over at the Ragland we saw a group of people gathered at the stern of the ship. Upon returning to our sailboat, curiosity got the best of me so I trained my binoculars over to their vessel. What I saw was unmistakably a woman in a white dress standing with a man before what could only be described as an officiant. Moments later, they embraced and a cascade of petals showered over the couple.

We fired off a few fuzzy photos, feeling strangely paparazzi-ish. We concluded that we had probably been the only ones to witness the wedding ceremony of the legendary Neil Young and actress Daryl Hannah. 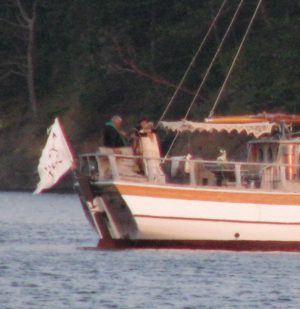 We decided that out of respect for the artists and what was obviously a very intimate ceremony, we would not try to publicize what we had witnessed. Over the next few days and weeks, we occasionally skimmed the gossip headlines, but not a peep about the wedding! Finally last Monday we finally started reading headlines “Neil Young and Daryl Hannah reportedly marry.” Only a few of the articles mentioned that they “also got married on Young’s yacht somewhere near the San Juan Islands.” Now that the couple has gone public (and confirmed what we saw) we felt that it was appropriate to share what we had observed. As Neil Young is Ron’s all-time favorite artist, it is all the more exciting to realize that aside from the wedding party themselves, we were probably the only people in the world to witness their nuptials against the striking backdrop of the beautiful San Juan Islands we call home!

Click the link below to hear Ron’s KISM radio podcast!

Neil Young got married in the San Juans